I Have a Dream! The strange attractor

The gifts of chaos

Today I would like to come back to the importance of the strange attractor, the least known of the three, very useful especially in the crisis situations that we are going through or that we may go through.

What chaos theories teach us is that chaos is not a mess, disorder or havoc!

A system (a set of things that interact with each other like a human body, a company, a collectivity, a nation, humankind) can be in one of these states: disorder, order, and chaos.

Disorder: we cannot foresee and we cannot control.

If we are faced with a system in a state of disorder, we should not try to control or predict it. We can at best find out whether there are statistics, probabilities, that we could use.

A second possible state in life, in nature, is order: once we understand the system, we can predict and we can also control.

For example, once you understand how the system works, a machine, a car, or an airplane, you can control it.

If all goes well, even with a very complicated system like an airplane, when the captain pushes such and such a button, something happens that is planned (otherwise we do have very serious problems!)

Order: we can predict and we can control.

If we are faced with a system in a state of order, sometimes called a linear system, we must seek to understand the functioning of the system, which will allow us to predict and control its evolution. 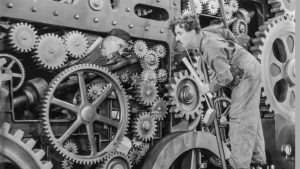 What we have discovered thanks to Chaos theories is that there is a third possible state where at the same time, as with disorder we cannot predict, and as with order it cannot do just anything!

There is a hidden order, which is called a strange attractor.

Below, you can observe the strange attractor of Lorenz (the same Edward Lorenz who coined the term butterfly effect). The moving dot corresponds to the description of an example of a chaotic system. We cannot precisely predict the trajectory of the point (therefore the state of the system) and at the same time, it is easy to observe a pattern.

The moving dot is following a pattern. So is the system!

Chaos: we cannot predict what is going to happen and at the same time there is a hidden pattern.

If we are faced with a chaotic system, there is no point in trying to precisely predict or control the evolution of the system. This is doomed to failure. What we can do is seek to identify (or create) a hidden order: the strange attractor. We can also seek to use the self-amplification phenomena specific to a chaotic system (butterfly effect): how to change small things to have great effects, for example to set up routines or rituals in one’s life.

A strange attractor, how strange?

Before seeing how to create and use your own strange attractor in our chaotic world, I would like to illustrate the idea of ​​the strange attractor with two metaphors. Metaphors are not reality and at the same time they help our brain to understand new things by analogy!

Have you ever ridden a bike or motorbike in the sand?

I remember the first time I rode a motorcycle in the sand. It was during my studies and we had decided with my friends Philippe, Franck and Pierre-Alain to cross Morocco by motorbike during the “summer holidays”.

During this trip, I waited with impatience and excitement to arrive at the sand dunes of southern Morocco.

So here we are in front of the superb dunes. 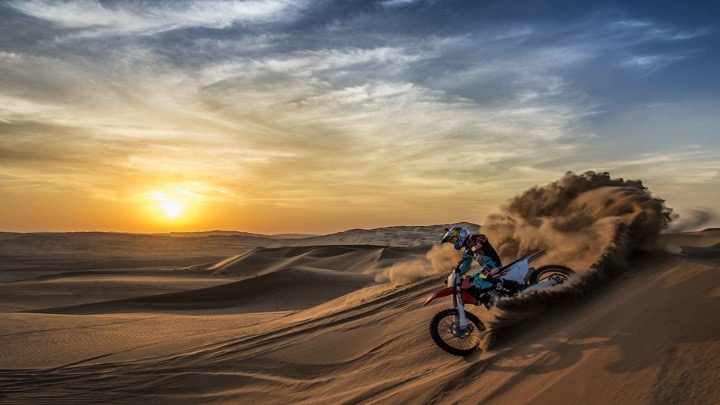 And off I went to attack the nearest one. From the first few meters, the handlebar of my motorcycle begins to oscillate to the right and to the left and the more I try to control it, the more it gets worse (the self-amplification effect) until what is called in the theories of chaos collapse (more commonly called the crash in the world of bikers …)

After several tries (and several crashes), the only solution was to call on my friend Pierre-Alain, who was a real experienced biker, to get me out of this.

Because he knew the secret: to avoid falling, it is important not to focus on the handlebar. On the contrary, it must be forgotten, especially not to try to control but simply to look at a point in the distance in front of the motorcycle (it is also necessary to give speed to the motorcycle …)

This point that you look in the distance is the strange attractor.

The other metaphor I would like to share is the lighthouse in the storm: when you are in a storm, what will help you and your crew is having a very clear vision of where you want to go. The boat is pitching in all directions, the wind and currents can change, everything is unstable and yet you stay on course towards the lighthouse (real or virtual).

The lighthouse in the storm, the fixed point on a motorcycle, is your strange attractor. 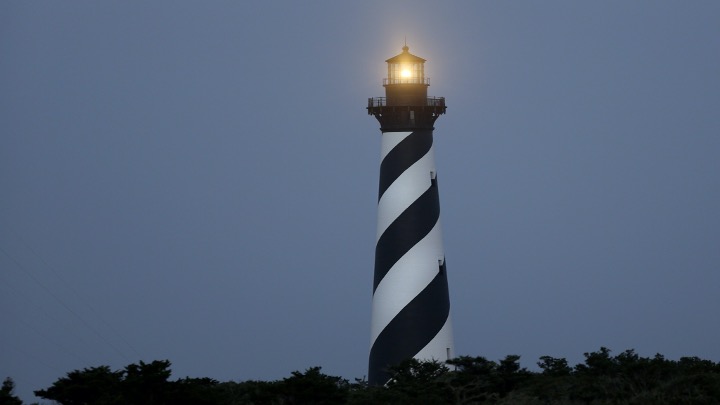 Create Your Own Strange Attractor!

Of all the people I have had the good fortune to meet, some have been more exposed than others to incredible levels of stress and uncertainty like members of special forces or war journalists.

I am thinking, for example, of John Peters. If you are British and are over 50, chances are you will know John: he is one of the last seven British POWs still alive. His plane was shot down by the Iraqi Army during the First Gulf War in 1990. He survived but was captured with his co-pilot by the Iraqi Army. They were imprisoned and tortured for 7 weeks before being released. 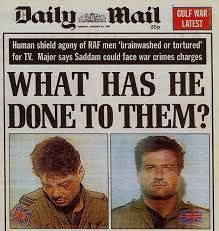 As we were having a drink together in London, I asked John: “In these times of incredible crisis, absolute uncertainty and intense suffering, what kept you going?” John thought for a few moments before answering me: “Two things kept me alive. Every day, I visualized very precisely my dream: the reunion with my wife and my children. I could smell their hair, the softness of their skin. I could hear their voices. And the second thing was to set up daily routines and rituals, like cleaning my cell every day (John was at times locked in tiny cells and without light…) This is what allowed me to stand physically and morally. ”

Because we live in an increasingly chaotic world today, I invite you to take John’s advice to thrive in uncertainty and be more resilient. :

Imagine that in a chaotic situation, a crisis like the one we are experiencing today and any that we may experience, we can create a strange attractor in our own life. Imagine that although we can’t predict everything in a crisis, we could make sure that not everything can happen?

The strange attractor has exactly the same function as the fixed point when you are in the sand on a motorcycle. Or the lighthouse in the storm. Or John’s dream: to enable you to be more resilient, to overcome the crisis and to emerge positively (John Peters received 25,000 letters from English citizens upon his return from Iraq, wrote a book about his experience. He is now a popular keynote speaker).

How to create or clarify your dreams?

I often meet people who tell me “I don’t have any dreams” or “I don’t want any“.

Personally, I believe that if you are human (which you should be if you are reading me… hello robots!) I am pretty sure you have dreams. Expressed or not.

What I call your dream or your vision or even your utopia (this doesn’t have to be realistic) is the answer to the question: where do you want to be in a year? or in 10 years?

Choose the timescale that has the most meaning in your life today based on your age, your history, and your personal and professional context.

How to find your dreams?

You don’t need to have specific, detailed dreams. A dream can be an image, an idea, a song, a painting, or a photo that evokes something for you.

Maybe you already have a clear vision of your dreams. Great, so if you haven’t already, write them down on a piece of paper or a note app on your computer / tablet / phone.

If you don’t yet have a clear vision of your dreams, don’t worry! The easiest way to define your dream (s), your strange attractor, is to do the following: go for a walk for half an hour, an hour, as long as you want, in the forest or in a park. You can also walk by the water, by the river, by the sea. Or meditate.

Before going for a walk or starting your meditation, bring this question with you: where do I want to be in a year or in 10 years?

You can phrase the question differently. For example, you can bring the following questions with you:

And go for a walk or meditation with these questions. 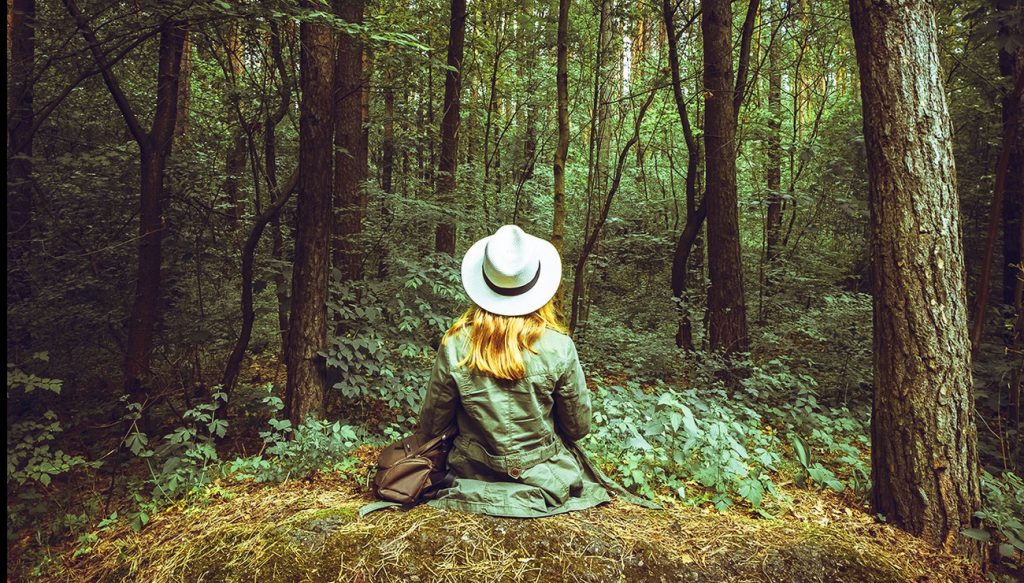 The secret to success is not trying to answer the question!

Let nature, the universe, God, the cosmos answer this question. Just let the answers emerge in your mind. There are days when you are going to have lots of ideas, and then maybe today is not a good day for you. It does not matter. Start over on another day. Above all, no pressure!

And as a team? As a family?

Often people ask me: should we all have the same dream as part of a team, a couple, a company?

My answer is of course no.

You don’t all have to have the same dream, whether it’s with your partner or with your team members!

What is important is that your dreams are compatible at least for a while.

If I use the image of the boat, your final destination may not be the same for everyone, but a bit like with hitchhikers, you will go together for some time because it must have made sense for you and for other family or team members.

I invite you to share your dreams very regularly with your loved ones or your colleagues in order to verify that, at least temporarily, you still want to continue this part of the journey together. 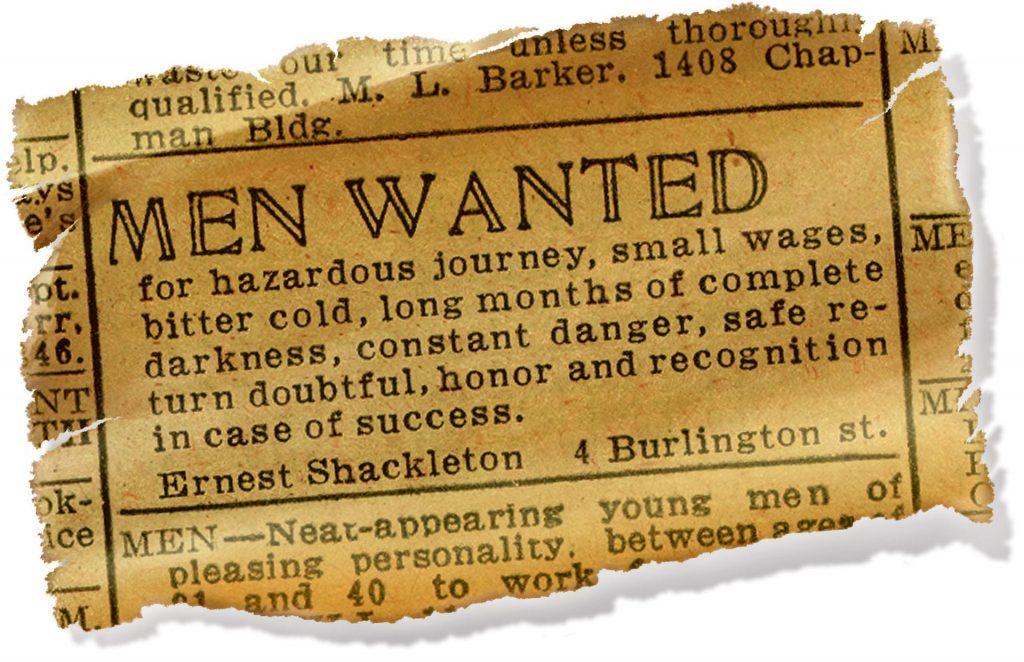 Your dream … or someone else’s dream

In the past, you didn’t’ need to have a clearly expressed dream. 150 years ago, if your parents were farmers in the South of France, statistically you would become a farmer in the South of France. No need to have a dream at that time. You could have one, but it didn’t have to be. Today in a more uncertain and chaotic world, it is much more important to be clear about your dream (s), to create your strange attractor, your beacon in the storm.

And today if you don’t have a dream, you may wake up one morning and realize that you are devoting most of your time, your energy, your life, to making someone else’s dream come true… which may not be your dream at all!

To increase the chances of achieving your dreams, one secret: visualize them every day.

Like John Peters, this is one of my most important daily routines.

I invite you to try: Take a minute or two to visualize your dreams, for example in the morning before you start your day.

You will then use two of the gifts of the theories of chaos:

This is my invitation: try it!

And tell me what you observe in your life …

Now check out the other gifts of chaos: the Butterfly Effect and Fractal Images.