The 42 IT School: in France’s First Nursery for IT Talents

The 42 IT School: in France’s First Nursery for IT Talents

I met Jean-Baptiste Prunel at the Parisian IT school 42, on the sidelines of a conference I was invited to give there. If you haven’t heard about 42, don’t worry: the school opened only a few years ago and is still fairly new. And although I went there, I would be forbidden to join as a student, the school only accepting to enlist those between 18 and 30!

Jean-Baptiste did join. And until recently he used to be part of Ledger, a bright French startup and a leading actor in cryptocurrency security. Launched in 2014, the company raised no less than $75 million four years later to launch new cryptocurrency-related products and become a global leader. An exceptional success story Jean-Baptiste is part of.

We had already met before this and, before we tackle the highly interesting topic of cryptocurrencies, we’re covering the no less fascinating one of Quarante Deux. Find out about where the next Steve Jobs may come from!

How do you enlist?

Its name inspired by the famous “answer to anything” number, 42 is of course not the first IT school to have seen the light of the day in France. It stems, however, from a completely new concept. There are no permanent teachers and no classes. Instead, students get projects they have to complete. An educational team is present to assess the work done. Students can also assist punctual conferences and get training sessions around coding paradigms, like Unity or object-oriented programming, or discover whole fields like IT security or network administration.

When you succeed, you earn experience points. These allow to access new trainings, then entire new levels. Achieving these may take between 2 and 5 years. If you achieve the last level, you have finished the school.

42 is first and foremost a “practical school”, Jean-Baptiste tells. One gains “soft skills” through a rather cooperation-oriented and horizontal working style. To make it, one must be willing to do it. New school, same tried-and-true recipe one witnesses again and again in entrepreneurship in general. 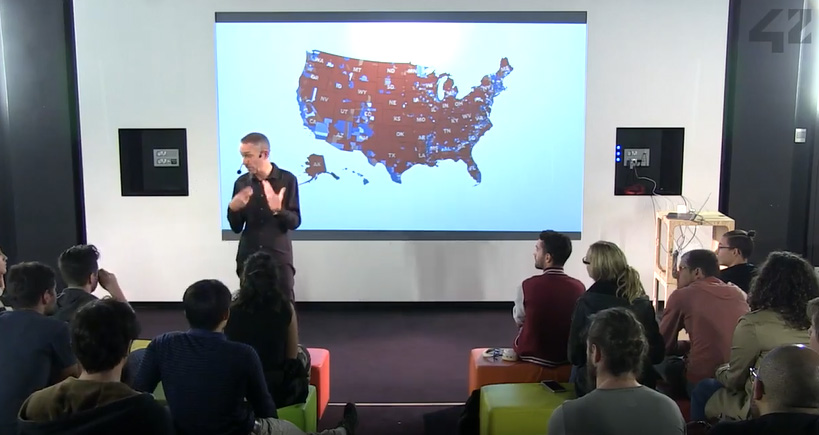 Me giving a talk at Ecole 42

But how do you enter 42 to start with?

The process is twofold. First step: take an online test. Taking approximately 4 hours to do, it can be completed anytime, even in the middle of the night if one feels so inclined. The test consists mostly in logical problems, vaguely resembling to parts of IQ or SAT tests but mostly focused on the kind of problems one will meet with again in coding. The school’s motto, “born2code”, is clear enough. So far, roughly 50.000 individuals have undertaken the online test every year. Out of these, only 3.000 get selected.

This is only the first step. Then, those who got selected receive a formal invitation to attend the next piscine (in French, “swimming pool”). The piscine consists in a one month long in-house testing session. The applicants stay busy working on various projects. A feared ordeal, the session is “hard, but one learns a lot about working under pressure, on what one can do and on one’s future friends!”

Organizing 2 to 3 piscines per year, the school invites roughly 800 individuals to each session and admits only one-third of these. As a member of the education team explains (in French), a third of the applicants gives up before the end, one third is rejected and the last third is accepted.

However, Jean-Baptiste adds, by the end of the first year, only half of those who succeeded at the piscine stay. Those who drop out because they find it too hard usually do so during the first four months. Afterwards, those who get away before getting a formal diploma do it for completely different reasons, as we are about to see.

The Second-Chance School That Became A Leader

In 2015, two years after Ecole 42 had opened its doors, it was called a “second-chance school.” The first year, indeed, most applicants had already spent one to several years in the post-secondary educational system. Now, by the end of 2018, the school gained fame and reputation and a substantial proportion of applicants come straight from high school.

Age and passing the tests are the only restrictive criteria. Beyond that, you don’t need any particular degree to come in, not even a high school graduation.

The school is also completely free: all its costs are financed by billionaire founder Xavier Niel up to 2023. Students only have to pay for their Social Security, a measly hundred euros a year, and even that can be covered by public scholarship. The founders expect the ex-students who succeeded in creating IT companies or finding employment to repay the school, which is a non-profit organization. “I think this is going to work”, Jean-Baptiste says. 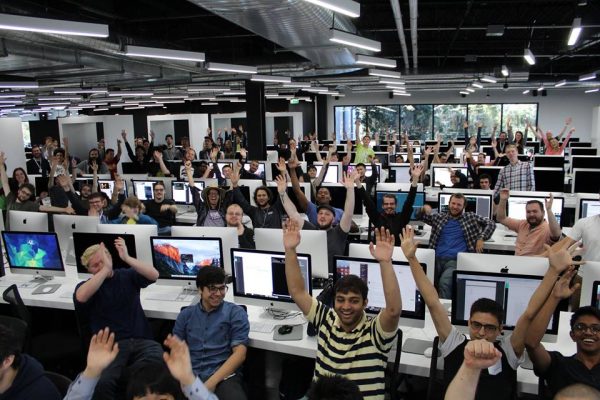 42 is based on a cheap model: the place is full of computers and have an educational team, but no teachers. “Even if we had to pay for our tuition, the fee would remain low anyway.” The cost per student has been evaluated around 2.000 euros a year, which is much lower than the usual “higher learning” institutions. In France, an average university student costs no less than 11.260 euros a year, according to the government itself (in French), and the return on investment is often doubtful.

“The piscine does not evaluate whether you are good or not at coding”, Jean-Baptiste adds, “but if you can learn, work a lot, and work cooperatively with other students as if in a team.”

So far, the school has functioned well enough to get exported to the USA, which isn’t that usual for a French project. The US-version will open in Fremont, California, i.e. the Silicon Valley, and Xavier Niel also announced he would open other schools in Algeria and Morocco to answer the demand for offshored IT. The Moroccan school will be creatively named 1337. If you get it without clicking on that link, perhaps you deserve at least the name…!

Without a doubt, Jean-Baptiste must have had his share of memories at 42. When I ask him about his 3 better and 3 worst memories from the school, here is what he answers:

1) Experimenting with polyphasic sleep. During the piscine trials, Jean-Baptiste slept 4 hours a night, then 20 minutes thrice a day. He managed to maintain this rhythm for 5 weeks, including “one week before the piscine to be ready.”

According to some researchers, polyphasic sleep is almost pathological and would bring no benefit to whom sleeps that way. This does definitely not mirrors Jean-Baptiste’s experience: the young IT professional noticed that he was able to remain awake for a longer time, thus making more room for work. “This was interesting to experiment, hence I remember that as a good memory.” Eventually, he came back to normal sleep after the trials because the frequent naps made it hard to maintain a regular social life.

Thanks to his peculiar sleeping pattern, Jean-Baptiste managed to work for unbelievable lengths: a whopping 19 hours per day. Just like a marathon, it was gratifying, he says, to find out he was able to carry on.

2) Philosophical conversations with another “swimmer.” A girl who attended the session as well, “a biologist by training”, now Jean-Baptiste’s good friends started conversations about the meaning of life and other far-fetched yet ultimately fascinating topics. According to him, this testifies the high level of 42 and was a treat during the otherwise long, demanding training sessions. Later, he also had lots of similar discussions with other accepted students. 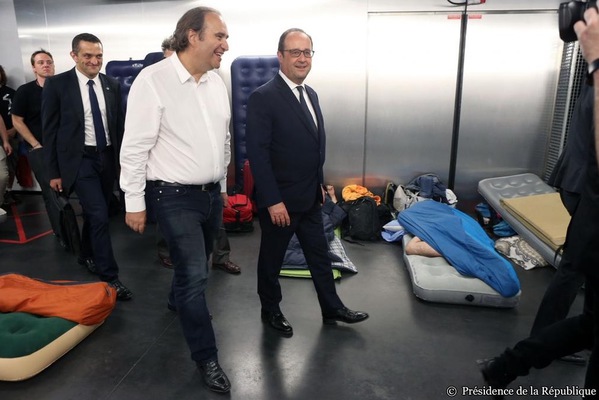 President François Hollande visited 42 along with founder Xavier Niel. Notice the sleeping student on the right side

3) “I don’t have a third great memory, my apologies !” After all, not fitting in the usual structure is part of the 42 spirit.

As for the worst memories, Jean-Baptiste remembers mostly one: the food. “When you work so much, you don’t have time to think about cooking. Sometimes, you manage to be strategic or make room for cooking but eventually you end up having a cheap, easy, hence bad diet.”

Once the students pool has become stable and the selection pressures start to decrease, many students leave school before they complete a level high enough to get their diploma. But they don’t do so because of failing; they leave the school because they get hired very quickly. Big name companies like Google have representatives at 42. “When you get a proposition for a full-time, well-paid job”, especially at a famous venture, “you will usually accept it even if you haven’t formally finished the training.”

What Moves in a City?

This is almost what Jean-Baptiste went through. My interviewee remained at 42 for six months. Then, he dropped out to launch his own startup. Poleon.co attempted to track “what moves in a city.” Bicycles, people, events—Poleon’s API-driven program used machine learning and data to guess where people, vehicles and so on would be at a future time. Poleon’s succeeded at tracking and predicting, for example, the number of available bikes at a particular park station. Thus, it would “allow [Poleon’s] customers to adapt their supply and pricing dynamically to serve their markets effectively.” 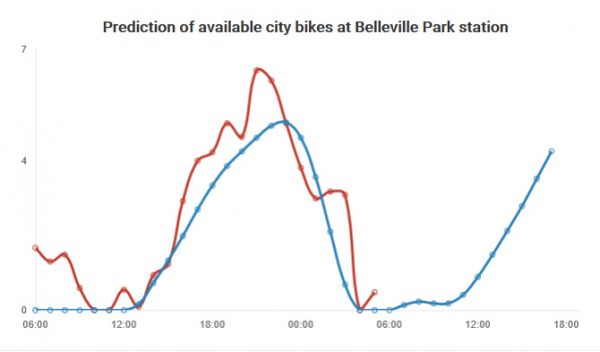 Ultimately, Jean-Baptiste had to stop the company’s activities. “Some data are easy to get from official sources like cities or governments, but structured, precise, real-time data is much harder to get.” The authorities-given data showed too random and unstructured to notice reliable patterns. Without any short-term or even middle-term prospective for better data, the project went nowhere.

The Poleon.co venture was, however, far from wasted. Jean-Baptiste testifies how much he was able to learn firsthand. “I became more problem-oriented, focused on issues” and saw projects as means rather than ends in themselves—which is important to young people, as schools tend to focus more on their own projects and exams than on what comes once the studies are finished. As the company’s CEO, Jean-Baptiste “also learned how to motivate people and get them to work as a team, towards the same goal.”

At this point of the interview, I remembered I had invited Jean-Baptiste to pass over so that we could speak about cryptocurrencies. What made my interviewee attain his current position wasn’t merely 42 or Poleon.co, but what he did later and which my next article will focus on. If you are into cryptocurrencies, you don’t want to miss it.

To know more about the 42 Parisian IT school, Silicon Valley school and about the Poleon.co real-time tracking and predicting initiative, you can check their respective website, as well as Jean-Baptiste Prunel’s personal medium.com page.